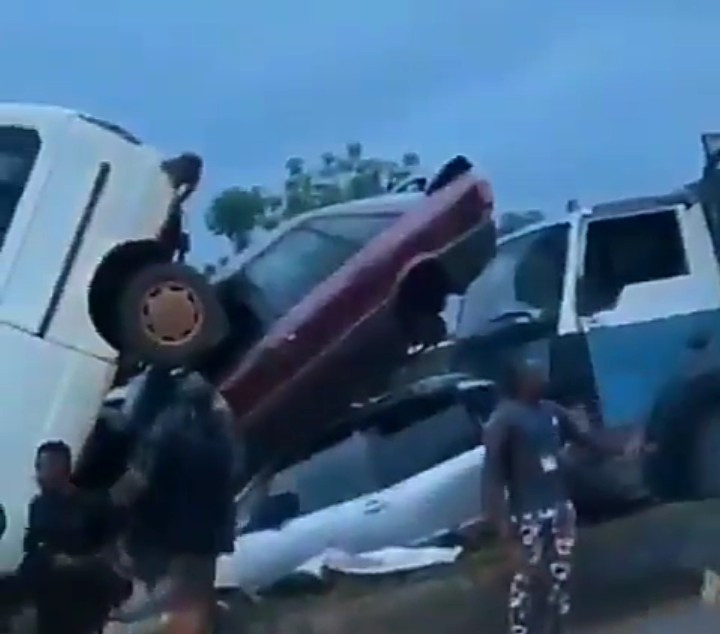 Not less than 4 vehicles were involved in a ghastly accident in Benin, Edo state as commuters were in a hurry to get home before the 7 pm curfew that was set by the Federal and Edo state government.

According to an eyewitness, the incident happened at the prominent Upper Mission Road, Benin. However, in a photo taken at the scene of the incident, cars were seen been clustered on top of each other, leaving people in confusion while some wondered how it happened. The vehicles included in the fatal accident includes an 18-seater passenger bus, an ash car, a truck fully loaded with Pepsi drinks, and a red sport car.

According to commuters and eyewitnesses, no life was lost in the incident. Those involved were immediately rushed to the hospital.

Recall that on the 19th of April, the executive governor of the state, Godwin Obaseki imposed a 10-day curfew in Edo with effect from April 20. A decision which was agreed to, in a bid to lessen the spread of the deadly Coronavirus disease.

Businesswoman, Judith Omonua, dies in Nigeria after her surgery was postponed due to COVID19 lockdown
Community transmission rate in Kano is now 80 percentage - Head of Presidential Task Force on COVID19 in Kano, Nasiru Gwarzo