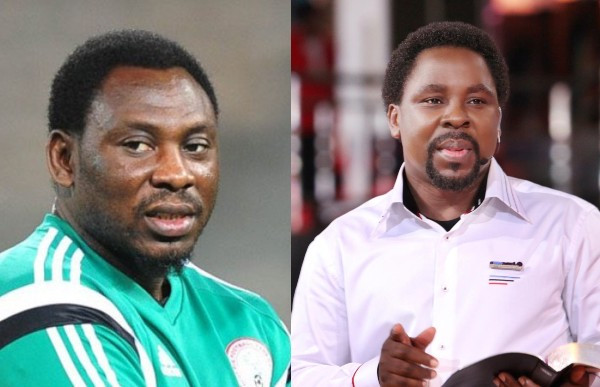 Former Super Eagles Player, Daniel Amokachi who was also a member of the Atlanta 1996 Olympic gold winners, has recounted how he slept for weeks at Prophet T.B Joshua’s Synagogue Church of All Nations (SCOAN), expecting miracles, but unfortunately got no miracle afterward.

The footballer revealed this in an interview with a radio station, Brila FM, confessed he was hoping for a remedy to his ailment at that time, as he suffered a protracted knee injury ahead of the 1998 FIFA World Cup.

‘The Bull’ as he is fondly called, said; “I was at the church on the invitation of a friend who is a member of the SCOAN. My friend, who invited me, told me about the numerous miracles which prophet T.B Joshua has performed and intensify that most of the sicknesses he has healed are outrageous. He told me that if I met with the man of God, I would surely be rejuvenated. “At first thought, I didn’t concur to it, but I later decided to flew down to Nigeria from England to see TB Joshua. “I slept by the church’s altar for some weeks, so as to receive healing. I was not healed, but I saw lots of miracles that happened to different the church.” Amokachi expressed.

However, Amokachi’s football career ended after he left Turkish side Besiktas in 1999. He allegedly failed a medical test after signing a contract with the 1860 Munich after which the contract was canceled. The 47-year-old former player had an exhilarating career as he was a fellow of the Atlanta 1996 Olympic gold winners, he took part in the 1994 and 1998 FIFA World Cups, and also participated to win the 1994 African Cup of Nations.

Brescia president Massimo Cellino reveals he and his child have tested positive for COVID19
Billionaire businessman, Willie Anumudu, dies at 68