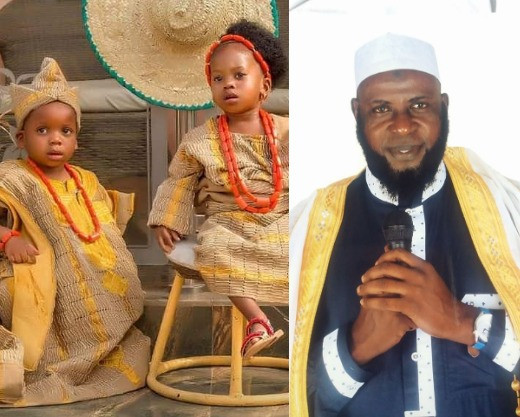 It’s been more than one week since the abduction of the 2-year-old twins who were children of the prominent Oyo-state Islamic cleric, Sheik Taofeeq Akewugbagold.

The cleric who announced the kidnapping of the twin children in a post via his official Facebook page on Sunday April 26, declared openly that his kids, were taken away at gunpoint at his Ojoo residence in Ibadan the Oyo state capital, on Saturday night, April 25.

The state police spokesman, SP Fadeyi Olugbenga, who confirmed the incident to AsorockOnline, told our correspondent that efforts have been geared up by the state operatives towards the rescue of the children alive and to bring the kidnappers to justice.

However, the Asorock Online team reached out to the family of the children, Taofeeq Akewugbagold, who was the abducted kid’s father disclosed that the abductors have reached him through phone calls and are demanding the sum of £100,000 ransom which approximates to 55-million-naira.

”The abductors of my children have contacted us through phone calls and we have been exchanging conversations with them. They have demanded £100, 000 which is approximately N55 million, since then we have been begging them day-to-day to reduce the amount and I strongly believe that they will consider our requisition. The abductors were fluent in English grammar, which means they are graduates. At first, they spoke rudely and harshly but later extremely sympathetic and considerate.”

“I implore the government to wake up to their responsibilities, because if things continued like this, only God knows what will happen and who the next victim would be. They sent us pictures of the kids, we studied it closely and saw it was not photoshopped. The children looked unhappy. One was crying while the other one’s eye was swollen. It is a horrible circumstance that I can not even pray for my enemies,” he explained.

The mother of the twin who was barren for 12 years before she later conceived and gave birth to the twins has been sick and unhappy since the incident occurred. Apparently, she did a video that went viral on social media in a few days back where she was seen weeping while appealing to the abductors of her children to release them.

”We have been moving their mother from one hospital to the other since that day while for me as a man, I’m just endeavoring to control myself because it is raising my BP. I put my hope in Almighty Allah.” Akewugbagold said.

Nonetheless, Asorock Online tried reaching out to the state police command spokesperson to ascertain if there is any progress in the search for the twins but all efforts made prove abortive as he was unavailable to pick our calls as the time of filing this news.